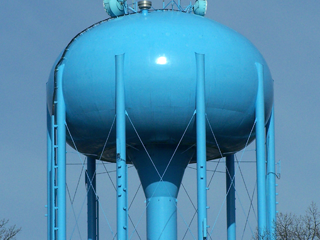 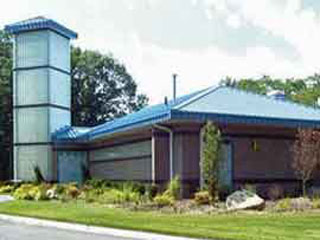 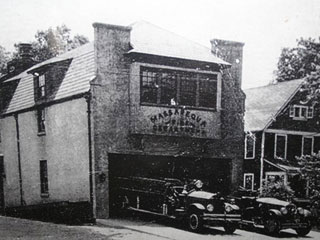 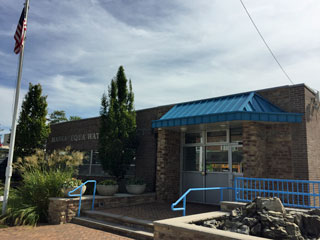 Long Islanders generally provided for their own water resources by means of private wells and cisterns. Thus by the late 19th century a number of Long Island communities found it necessary to create and maintain their own municipal water supply. Although the local population remained relatively sparse in the pre-1920s, the approximately 1,500 Massapequa residents thought it sizeable enough in 1910 to warrant the establishment of the Massapequa Fire Department for the maintenance of safety and health. This was the general background as Massapequa entered the 1920s and 1930s that wrought such significant changes to the vicinity including the expansion of the public school system, the incorporation of the Village of Massapequa Park, and the debut of the Long Island railroad station in the village. Prior to 1920 there were only 18 homes in what originally was called Massapequa Gardens and is now Massapequa Park. Residential and business development progressed fairly rapidly so that in 1931 the village of Massapequa Park became an official formality that helped launch supplementary growth thereby insuring still further swelling of the local population. Responding to the growth of the area in 1927, the Town of Oyster Bay, that encompasses the Massapequas, established preliminary water district boundaries. In 1928 community leaders including Edward H. Floyd-Jones and future Massapequa Park Mayor Peter F. Colleran, focused on forming an official water district. They circulated a petition, obtained consent from owners of 51 percent of the taxable property within the proposed district, and presented it to the Town of Oyster Bay to recognize the Massapequa Water District as a legal entity with jurisdiction over the local water supply.

Ably assisted by attorney George Morton Levy, who gained fame in subsequent years for developing Roosevelt Raceway, and Massapequa resident Assemblyman Edwin Lynde, the entity moved to obtain state approval. In April 1930 the New York State Legislature approved and Governor Franklin D. Roosevelt signed a bill that created the Massapequa Water District. At the time there were 672 residents and an estimated 184 water district customers. The assessed valuation was listed as $4,665,100 plus Long Island Rail Road property valued at $50,000 for a total of $4,715,100. The new Massapequa Water District Board consisting of Thomas H. Fraser, chairman, together with commissioners William Rohr and George Haight, began holding regular weekly meetings in February 1930 dealing successfully with a variety of issues such as establishing district water rates, obtaining funding for construction projects via municipal bonds, installing water meters, and other pertinent issues. The original water district budget was $9, 650.

For approximately 25 years the Massapequa Water District satisfactorily served a modest population with water purchased from New York Water Service Corporation, a private water supply company. The enormous transition from urban to suburban settlements that impacted Long Island in the decade following the conclusion of World War II was soon reflected in demands for water in the Massapequas. Whereas the water district provided water for 184 connections in 1931, in 1955 it would be responsible for 9,090 connections.

Accordingly new infrastructure needs required the Massapequa Water District to ratchet up its services that in 1954 found it constructing miles of transmission mains and four new wells wholly properties of the Massapequa Water District, and other necessary steps to facilitate adequate water service. Writing in 1957, Commissioner Wilbur R. Elling succinctly summarized the transformation.

Since 1946 the number of customers has increased 860% and this tremendous increase has made it impracticable to continue indefinitely the purchase of water from the Corp. [New York Water Corporation] When the district was small there was an advantage in purchasing water from the Corp. in that it enabled the district to enjoy the advantages of being part of a relatively large water supply system. Now the district is large enough to support its independent system

The Massapequa Water District, with central offices, located at 84 Grand Ave., Massapequa, oversees water provisions for a district that encompasses portions of unincorporated Massapequa and for the Village of Massapequa Park. It services the water needs for approximately 13,000 private residences, plus businesses and other establishments for a total of approximately 45,500 people among its 14,000 customers. Actual water use is metered and paid for by each customer. The Massapequa Water District employs twenty people including management, office and field workers, most of who are represented by the Civil Service Employees Association (CSEA). There are three commissioners elected for three-year terms on a rotating basis. The Board?s regular meetings are held each Wednesday of the month, in addition to special and emergency situations.

Well #9, the newest well constructed by the Massapequa Water District and located on Sunrise Highway, is a an example, not only of state of the art well construction, but also serves as a centerpiece of an effort to bring the community closer to the operations of the utility. Whereas in the past residents were not encouraged to see the working of District facilities such as wells, the current perspective is more inviting. In user-friendly fashion, the District hopes to invite residents to visit the operation of Well #9, thereby educating the public as to the role that a water district plays in promoting the health and safety of the community. In sum, the Massapequa Water District is an often taken for granted service that in fact is an essential feature of community life in modern times. It strives to provide a basic necessity for the health of community residents. Accordingly, an ample and healthful water supply serves to encourage commerce as well as recreational activities. Equally important, it provides water for fire fighting needs locally.

The MWD currently maintains four water supply sites with four well pump stations, eight operating supply wells, three booster pump stations, four storage tanks and approximately 145 miles of water mains. A study was prepared in March of 1995 which determined the need for an additional well to meet demands and to maintain the reliability of its water supply system.

The original proposed site for Well # 9 was at the Northeast well field (NEWF) located at Ocean and Maryland. The District raised concerns regarding the water quality at that site and asked that the District Engineer prepare a letter comparing water quality at the NEWF and surrounding supply wells. This letter and subsequent reports commissioned by the District during 1996 and 1997 revealed the potential threat of aquifer contamination at the NEWF and retained an Engineer to identify potential well sites in the MWD service area. The criteria for the alternate site needed to address its proximity to transmission water mains and be free of contamination, or its threat in the future, as could be determined at that time.

After a thorough review of the proposed sites, it was determined that the most feasible site for the proposed new well was vacant land located on Sunrise Highway west of Hicksville Road, which was owned by Nassau County. This land was once part of the old New York City water system and after negotiating with Nassau County, the District, and with the direct assistance of Legislator Peter Schmitt, obtained this land at no cost.

The District then embarked on a long term project to produce a facility at this site that would be both aesthetically pleasing to both consumers and the traveling public along Sunrise Highway as well as an educational facility, for young and old alike, in order to educate them regarding the supply of potable water to their homes. In addition, the District remained committed to preserving the greenbelt along Sunrise Highway by removing only those trees that were necessary in order to construct the facility.

In December of 2002, the District finished the installation of new Well # 9 and performed all necessary water quality testing. The well was installed first, in order to insure that the well would produce the highest possible quality water and once it was determined that the well met or exceeded all regulatory requirements, the District then embarked on this second phase: the construction of the New Well House with all of the necessary piping, electrical equipment, chemical storage and pumps. This work began in September of 2003 and is now completed.